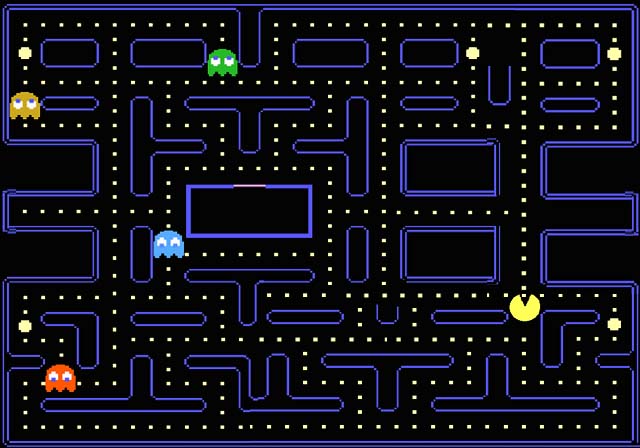 The player controls a circular character which has a pie wedge shaped mouth to eat pellets through a maze, eating Pac-Dots. When all dots are eaten, Pac-Man is taken to the next stage. Four ghosts, Blinky, Pinky, Inky and Clyde roam the maze, trying to catch Pac-Man. If a ghost chomps (touches) Pac-Man, a life is lost. When all lives have been lost, the game ends. Pac-Man is awarded a single bonus life at 10,000 points by default–DIP switches inside the machine can change the required points or disable the bonus life altogether.

Near the corners of the maze are four larger, flashing dots known as Power Pellets, provide Pac-Man with the temporary ability to eat the ghosts. The ghosts turn deep blue, reverse direction, and move slower when Pac-Man eats one. When a ghost is eaten, its eyes return to the ghost home where it is regenerated in its normal color. Blue ghosts flash white before they become dangerous again and the amount of time the ghosts remain vulnerable varies from one round to the next, but the time period generally becomes shorter as the game progresses. In later stages, the ghosts don’t change colors at all, but still reverse direction when a power pellet is eaten.

In addition to Pac-Dots and Power Pellets, bonus items, usually referred to as fruits (though not all items are fruits) appear near the center of the maze. These items score extra bonus points when eaten. The items change and bonus values increase throughout the game. Sometimes, items can appear several times. Also, a series of intermissions play after certain levels toward the beginning of the game, showing a humorous set of interactions (the first being after level 2, which has a giant Pac-Man chasing a blue Blinky) between Pac-Man and Blinky. Intermissions: #1: Giant Pac-Man vs Blue Blinky. #2: Blinky chases Pac-Man, but gets cut on a white stick. #3: Number 3 has Blinky, who’s wound has been glued on again, chase Pac-Man, but his entire slime (body) fall off! Intermission 3 is used as all other intermissions after.