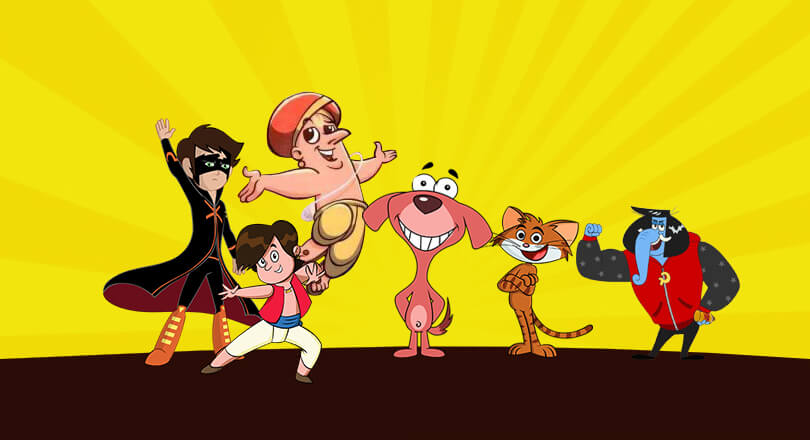 Can you imagine a day without videos? From toddlers to aged people, everybody is glued to the it every day. Kids are majorly fond of the colorful and imaginative world of cartoons and animations. A huge number of channels exclusively for kids have come up with cartoons that are entertaining and informative. More and more channels are bringing up cartoons to woo the kids and attract their attention. It has become a perennial source of fun and entertainment in a kid’s life. There’s way too much being offered by various channels that keep the children engaged all day through. With these cartoons, the visual communication method is far advancing. After careful analysis by many experts, it is determined that irrespective of languages, the kids are attracted to cartoons that appeal to their eyes. Hence, the visual communication established via cartoons is unavoidable.

If it was comics that lured the children in the earlier days, now the cartoons add wings to their imaginations. Children being young, they find it easier to relate to their favorite cartoons and follow the lessons learnt from these animated series in the daily life. Cartoons communicate in various ways with the kids and influence their imagination and social behavior. With the pediatrics field exploring the field of visual literacy, the world of animations is also inculcating some guidelines to put up in making cartoon series that are rightly beneficial for kids, making their brains sharper and making them socially responsible people. These cartoons have lasting impacts and to grab attentions in the media and hence, innovative methods are being included to make them more appealing.

Choosing from the vast series of cartoons that appear in the TV is a cumbersome task. Kids have the liberty to choose any cartoon that attracts their attention, but parents need to keep a watch on what the children watch. But how does a parent choose which cartoons are the best for their kids? Indeed, a difficult choice to make! Every character in a cartoon has a silent influence on the child’s mind, hence choosing the right one for your kid can be tricky. Cartoons are always a mix of series that are either based on family, friendship, adventure or just pure fun. The best approach is to watch them along with your child and see how they respond to each cartoon. While you both watch cartoons together, you can bond better and also understand what your child is more inclined towards – slapstick comedy like Cat & Keet on Chotoonz TV or adventures like Ben 10 or the Power Puff Girls. You can guide your child to watch cartoons that encourage friendship, positivity, good behavior and healthy eating. Choose cartoons that are funny or educational.

Here are a few types of characters that are popularly hosted by many cartoon channels that every kid can watch and enjoy. They not only keep the children entertained, they also imbibe many positive habits and behavioral tips too.

Kids nowadays are fond of characters that are totally imaginary like the Magical Tooth Fairies. Magical and imaginary characters are an ideal way to instill the creativity in kids. Fairy tales like Cinderella and mythical stories like Panchatantra can teach some good values and morals to the children. The stories of Thumbelina, Jack & the Beanstalk, Beauty and the Beast, Snow White and the Seven Dwarfs, The Little Red Riding Hood, Alladin and the Magic Lamp etc show the children a beautiful world of imagination where each of the characters teach them something new about the world. These are the first stories we share with the children and their animated series let them visualize these stories. Another advantage is that while most of the kids cry at thought of losing a tooth, with the tooth fairy series, the imaginary character of tooth fairy is welcomed by the kids and they feel happier even with the loss of a tooth, as they receive presents. These imaginary characters let them enjoy the tiniest joys of life.

This is the most liked type of characters among kids. Kids love superheroes for their super natural powers, inclination towards helping the needy and commitment to the society. It is natural for a kid to assume himself/herself to be a superhero, and try to behave like a superhero. The concept is good for any kid, as a superhero will induce good values within kids,

Shows like Winnie the Pooh tell stories of friendship. Winnie, in spite of being a Pooh, shows typical human emotions and interventions and is very much humanistic. Kids can easily relate to the emotions and other human reciprocations quite easily in a witty as well as convincing manner. Kids are more fascinated with animal series. Winnie the Pooh is one such cartoon which kids love to watch. The narration is simple and catchy. Winnie and his friends, Tigger the tiger, Piglet the pig, Eeyore the donkey, Rabbit, Roo, Owl and Kanga, share their stories of friendship which children love.

The girl named Dora and her pet monkey Boots go on adventure rides and explorations in this series. The story always has something for the kids to explore and find. The show gives kids a chance to explore the world around them and even improvise their problem-solving skill.

Tom and Jerry is an all-time favorite cartoon series for all ages. There are none in the whole world, who has never watched Tom and Jerry Shows. The cat and the rat fights with commendable tales that sets you glued to the seats is one of the favorite shows of all time. Kids enjoy Jerry’s mischief and the crooked Tom. Their funny wits and fights and their never-ending friendships are something that will have you rolling on the floor laughing. Even though the show does not have much dialogs, the series is always accepted and lets the kids enjoy. Kids get to know what real friendship means from this show. Even if there are fights and differences, friendship is the most powerful gift in our life. Rat A Tat and Cat & Keet shows from Chotoonz TV also belong to this category

The image of the muscular, Popeye having green spinach is what strikes the mind whenever the cartoon name flashes in our mind. The cartoon was an inspiration to many kids to enjoy the green veggies which kids hate to have. Many parents find it convincing to let kids watch the show and encourage them to have more healthy food to become like Popeye.

Cartoons definitely are there to stay. They have a wonderful influence on the children. Animations are a great way to instill creativity and imagination in children and show them a beautiful world full of colors, laughter and happiness. Cartoons come in different styles and genres. There are musical cartoons like Saari, Nursery Rhymes, Vitaminix on Baby Toonz TV that offer different types of infotainment to the children. They not only get entertained, but also learn many things from such informative cartoons. Parents can keep the children entertained by helping them choose the best cartoon movies and series so that they gain the right values and information. Animated movies and shows help children learn a lot through colorful audio-visual media. 3D animations and Stop motion animations are opening up newer vectors of technology and imagination to the children which they can utilize to learn through fun.

6 Ways to Celebrate International Peace Day with Your Kids 7 Tips to Get Your Kids to Love Doing Their Homework 3 Ways of Making Friends and Building a Strong Friendship 5 Practical Steps to Teach Your Kids to be Money-Wise 4th of July: Teaching Kids the True Meaning of American Independence 6 Great Ways To Stay Calm and Do Yoga with Your Kids 5 Ways to Teach your Child to be Compassionate Towards Others 5 Ways to Laugh and Have a Good Time as a Family How to choose the best cartoons and movies for your child? Different types of popular cartoon characters